Fernando, more commonly referred to as Shock Bracelet, is a male contestant in Primi's Airplane Panic .

Shock Bracelet is a round cuff made of metal. He has the skinny black limbs and beady eyes that are common in object characters. Far below his face is a red buzzer, and above his eyes is a bright yellow padlock. All around his inner loop are blue glass lights used to emit electricity.

Specializing in all kinds of gadgets and tools, Shock Bracelet's always getting around to help anyone in need. He is generous and desires to fulfill the needs of people nearby, not being busied with any important tasks that could get in his way, but he gets bored quite easily . Calm and collected in general, Shock Bracelet is easily able to tell when someone's having an issue with something. He is quite clever and finds solutions to problems in a matter of seconds. Having plenty of patience and tolerance, Shock Bracelet will go as long as it takes to help someone out with their issue, no matter how embarrassing or severe it is. However, if his patience is tested to an extent, he will change his tone and become more forceful and strict with whoever managed to push him, not taking notice of their feelings or needs to get them to quit lingering in their current issue. When a task is to be completed as a team for a competition or something, he will derive his members from all distractions and remind them there is a mission to get done. Shock Bracelet is good at hiding things, as well as athletic activity. He is against certain people but tries to mask it with his generosity and kindness.

Long after Primi's Airplane Panic took place, Shock Bracelet was a famous inventor in a facility somewhere in the Animation Dimension, known at that time as Cosmo Innovators' Guild. He was a top source for most inventions there, although not the most well-known. Shock Bracelet was able to handle technology such as complex A.I robots, floating platforms, antigravity, and even time travel. In his time, people had talked about the past and how "awful" and "stupid" it was. Shock Bracelet had been hearing this go on for months, and curiousity finally struck. Having a way to travel back in time without damaging the present, Shock Bracelet travelled over to year 2030, ending up on planet Barus. Taking a look around, he was rather amazed at what the people of this time accomplished before he did. He talked to and interviewed a few people there, later moving into one of the towns. Once he opened his laptop and got on his internet browser, he scrolled down and saw one of the featured articles, that displayed the announced the signups for Primi's Airplane Panic. He found this interesting and wanted to sign up for it to see how they've set it up. On the way he plans to take notes of activity and management of the show to add to his research.

Shock Bracelet is armed with quite a few weapons, such as a taser, a flaredrop gun, a stiffbat and a zip wire. Sometimes he is able to trap the enemy with the hollow in his body, shocking them with electricity. He knows quite a few attack skills. However, when his lock is opened, or cracked, he becomes unconscious, also realizing a very big shockwave

"I think the problem is ,that you stay on problems too long,and well, it gets annoying" 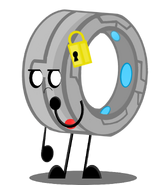