Carley, more commonly referred to as Minty, is a female contestant in Primi's Airplane Panic .

Minty is a white peppermint with bright red stripes, wirey black legs, and seafoam green eyes with one eyelash each. She wears a blueish green headband with four mint buttons attached to it. Her other accessory is a piece of candy with a green wrapper, that acts as a bow.

Minty is a strong, spunky and innovative young adolescent, who works quick on her feet and is willing to work on any piece of clothing that might just be the next big thing. She's a well-known fashion student in Paris, and is quite charitable for the poor and the unfortunate which has earned her a reputation. Her heart is as big as a diamond, but if you say something bad about her or her friends, she will be up in your face, and lecture you for days on end. But overall, if you don't piss her off, she's one of the greatest friends one can ever have.

As a young girl, Minty was born into a rather wealthy family, who raised her to have an interest in fashion and makeup all of her life. Living in a rich place was fun for her, but she also knew the dangers she naturally was put in, so she had to be careful. During her high school years, she continued her love for fashion, and took classes in Paris for design.

Minty is very energetic and somewhat athletiç, which is why she wears a headband, or a sweatband. She makes sure to keep it clean every day. She is a quite hard to wear out, and is a tough nut to crack (also literal meaning).

This character has no notable quotes. 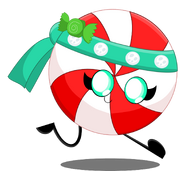