Priscilla, commonly referred to as Lettuce, is a female contestant in Primi's Airplane Panic.

Lettuce is, as her name implies, a large bunch of fresh green lettuce. The leaves were brushed into a bushy hair-like appearance. She has two skinny black legs, and eyes that each support 4 eyelashes. She also sports a hair accessory, which is a large, fresh-cut ruby bow with two golden cones attached to it.

Colorful and variant with natures, Lettuce's actions widely depend on her impressions on people around her. At times she is quick to judge, so one would have to take close consideration of their actions around Lettuce if they want a stable relationship with her. She starts out being somewhat stubborn with trust, not willing to be guided or partnered with someone she doesn't know very well. If one were to get along well enough with her, she would be almost like a dog to them, with loyalty, kindheartedness, and the will to protect her friends from danger of almost any kind, although there are times where she may cower out. Constantly binding to her standards, she strives to prevent being exposed to any filth or grime, to retain her luscious appearance as much as possible. If one were to use this trait against her, she'll resort to a more harsh and aggressive nature. Lettuce will avoid and defend herself these people at all costs, and if they got too close, she might even physically harm them. This nature may also be shown to people who have given bad impressions to her in general. Depending on what Lettuce had to deal with from a person, she may even reject all apologies whilst cussing them out. Although she judges people by her impressions on them, she's rather variant with impressions herself. Some don't pay attention to them and more focus on the beauty, but she has notable flaws, being awfully whiny and overreacts a lot. These flaws are easy to take notice of and some avoid her because of them. Basically, Lettuce is the surprise loot-bag of friendship.

Lettuce was born as a kitten in Hydrosia's capital, Nozero. She grew up listening to all kinds of music. Lettuce quickly became fond of the music she heard and even learned to sing to it. At age 10, she began writing her own songs, although she had never published them. She also got some friends to make a band with her at school. She designs some outfits and accessories for the band to wear when they perform. But along the trail of designing these, she thought herself to have more talent in fashion designing than song writing. So then she began to work more on designing new trends in her spare time. Never did she really break the news to the people in her band, they had just forgotten about it later. A few months later, she was kidnapped by Obmjos, turned into a ball of lettuce, and thrown into the Animation Dimension. She was found by a couple of rich parents, who wanted to raise and care for her, seeing how beautiful she was. Lettuce got to compete in a show called Article Insanity, that cancelled after five episodes. She made many friends there, such as Cheese Grater and Cashy, who helped her to escape the Animation Dimension, because she wanted to continue making trends for anthromorphic Pokémon and animals. But then, Lettuce, Cheese Grater and Cashy discovered Primi's Airplane Panic, and decided to have a go at competing in it, considering they wanted to take part in a game show that won't cancel quickly like most of them in the Animation Dimension.

While Lettuce doesn't fight bodily in combat, she is armed with a large, stiff golden mirror to batter enemies with. She can also use the mirror to reflect sunlight and burn the enemy if aimed correctly. 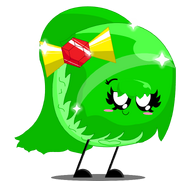 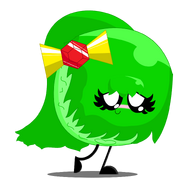 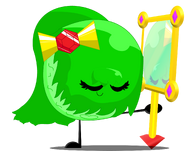 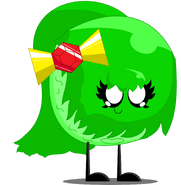