Illinoi, more commonly referred to as Chex, is a male contestant in Primi's Airplane Panic.

Chex is a bright orange pentagon-shaped chex chip with square holes, wirey black limbs, and beady black eyes. He wears a snowy white headband with a white plastic pin supporting a star badge attached to it.

This section has yet to be filled.

This section has yet to be filled.

As a Wind-essence creature, Chex can briefly take flight via a mini tornado. He can also whip up small spheres of forceful wind and hurl them at the enemy. Sometimes he can use the tornado that he flies with to smite his enemies. 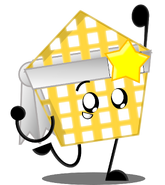