Brenda, more commonly referred to as Cashy, is a female contestant in Primi's Airplane Panic.

Cashy is a small gold medallion with skinny black limbs, and eyes that each support 4 eyelashes. She wears a large yellow bow also made of gold, attached to her forehead by a magnet. Her other accessory is a black string necklace with 4 knots and a Mushroom Kingdom coin attached to it.

Definitely one of the ditsiest girls one will ever meet. Aside from being a real girly ditz, Cashy does anything for a friend and takes close consideration of their feelings. She will gladly talk to a friend if they are feeling down, or comfort them if they're alone, though sometimes she is rather clingy. Usually she enjoys striking amusing conversations and telling jokes to her friends, unless that friend is too serious for jokes, she'll understand and avoid these subjects. Others would mistake her for someone gullible, but she can easily tell whether she's being tricked or not, being a great trickster herself. Although sometimes she "falls" for a trick on purpose just to see where it leads her, often getting her in serious trouble. Never does she really care, considering even after this happens she tries it again some other time. Cashy is always easily distracted and has a low attention span. She is difficult to take offense to anything, usually brushing it off in an instant.

Cashy had grown up in a distant area in Hydrosia called Ztormia. Instead of being a medallion like she is in the present, she was a tiny yellow mouse. Her parents who had adopted her at age 1 were a homosexual couple of male dragons, names Sienfold and Witchealorus (A.K.A Witchy). They treated her ultimately well, they valued her, and gave her the best resources they had for their child. She didn't attend a proper education class, so she didn't gain a lot of knowledge. One day her school went on a field trip, and they had encountered a segment of the area around the Cyber Realm entrance, which they tried to avoid. Cashy was too slow, and one of the Cyber-essence creatures had attacked her. Strangely enough, she wasn't harmed, but found herself with the ability to interact with digital elements, also known as "breaking the 4th wall". She became addicted to this ability and began to use it very frequently. At age 11, the evil sorcerer Obmjos abducted her while her parents weren't looking, and she was thrown into the Animation Dimension. She was found lying unconscious between the borders of Articraft Harbor and the Goiky Canal, by a family of objects (a mom and dad, and 3 kids). Cashy was shocked to realize that she had been turned into a golden coin. The object family took care of her for about a year before her friends from a cancelled gameshow she took part in (Cheese Grater and Lettuce) help her escape the Animation Dimension. Cashy and her friends wanted another gameshow to take part in; one that wouldn't cancel. When they reached a hotel in Terrico, they signed up for Primi's Airplane Panic.

Cashy, as a Treasure-essence creature, can create coins with her hand and throw them at the enemy. This is a skill known as Currency Shot. If near a digital device, she can use elements from cyberspace by breaking the 4th wall, and possibly use them against the enemy. Cashy's body is durable, and her blood is difficult to expose. 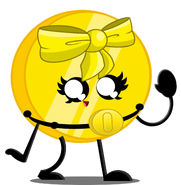 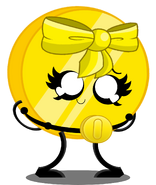 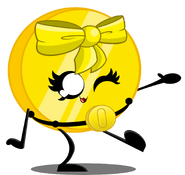 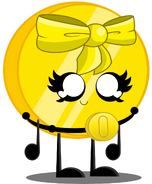