Elliot, commonly referred to as Box of Crayons, is a female contestant in Primi's Airplane Panic.

Box of Crayons is a pouch-like container filled with eight different colors of crayons, those being gold, red, pink, rose, seafoam green, sky blue, silver and purple. She is mainly colored yellow, with 2 green-shaded patterns on her lower body. Common in inanimate object characters, she has skinny black limbs, and beady black eyes each supporting 4 eyelashes. There are slightly visible star patterns on her front and sides, a rainbow swirl marking below her face, and a sticker that says "new colors". Above the transparent plastic seal that displays the crayons inside of her is a large red text saying "crayons". The paper slip that stands on her surface has a rounded rectangle-shaped hole, and unlike regular crayon cases which have a circle-shaped hole in between it, there is a heart-shaped hole punched across the first hole. Around the hole are texts that say "Colorful Crayons" in the upper right corner, and "Non-Toxic" in the lower left, with a big red "8" in the upper left. She wears a green bow with a plastic yellow crayon attached to it.

This section has yet to be finished.

This section has yet to be finished.

Box of Crayons is only capable in combat when she wields her Color Staff, as she has not learned any skills. She will likely retreat if not armed with this weapon. On rare cases, she may fight the enemy unarmed. 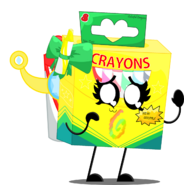